Livin' It Up on the Water: Flyboard Niagara Extravaganza 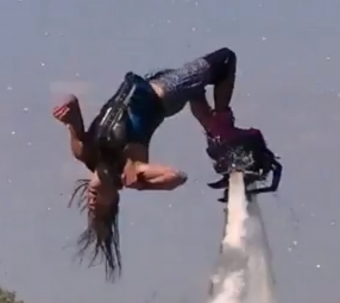 As the song says, they're flying high again at the annual Flyboard Niagara Extravaganza that took place in Jordan, Ontario in September.

Last month (September 2017) we visited the annual Flyboard Niagara Extravaganza that took place at Jordan Harbour with a dozen or more flyboard enthusiasts showing their talents. It seems, not only is it an annual event for the flyboarders, but also for us here at Lev8. We attended last year as well.

We became intrigued with this water activity a few years ago when we met Brian Grant from 905 Rentals (Long Beach) at a weekly networking event (yes networking really does pay off) we attend. Brian told us about his new business renting the Jetovator -- which until we saw it, we just couldn't visualize what he was talking about.... so, we went out to visit his location to learn more about flyboarding and the various tools of the trade.  It is something else to watch... That was, we believe three years ago.. How it has changed since...

But don't take our word for the amazing acrobatics at this event. Watch the video below as we capture the 2017 Flyboard Niagara Extravaganza.  We were quite impressed on how much everyone has improved over last year and the unique tricks and 'vehicles' they are using.

If you would like your event captured on video from the ground or utilizing our high-definition aerial drone footage:

Tell Your Story
with Aerial Video

Get a no-obligation quote for your project.
Elevate Your Moments in Time.

Request a quote. Elevate Your Moments in Time TODAY!